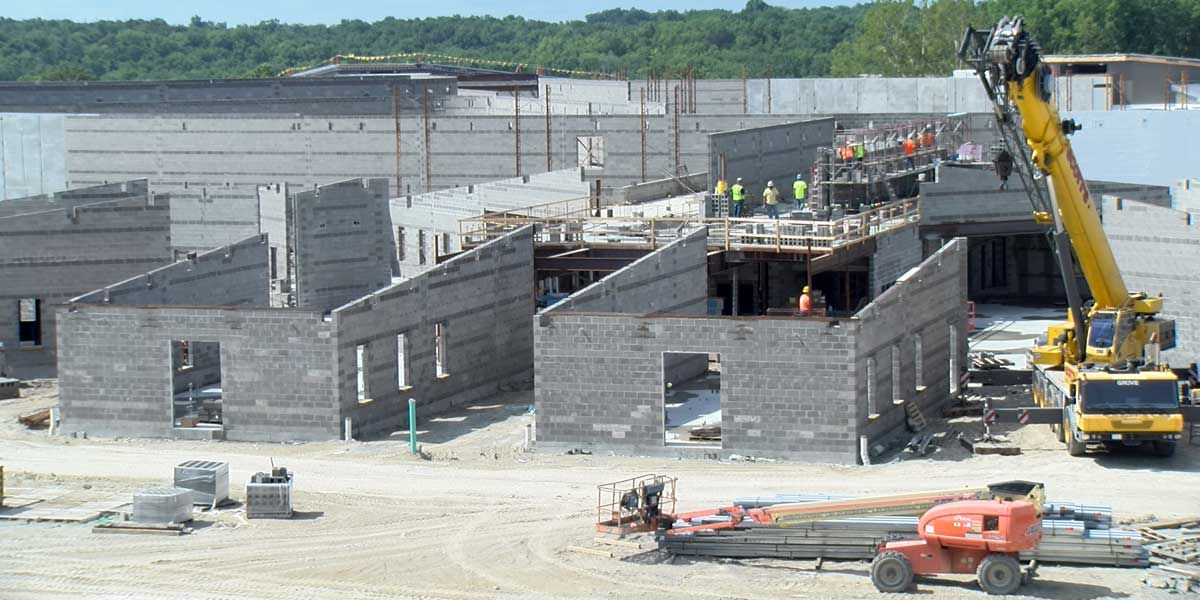 Designers of the new Fulton State Hospital originally considered utilizing pre-cast concrete. But a coalition of concrete masonry experts demonstrated how lightweight concrete block would be a better choice.

The Missouri Department of Mental Health is in the midst of replacing one of the state’s oldest psychiatric care facilities. The original Fulton State Hospital in Central Missouri dates back to the 1850’s and is the oldest public mental health facility west of the Mississippi River. Many of the more recent structures on site were actually built in the 1930s and were woefully out-of-date.

When funds were finally allocated to replace the aging facility, designers originally considered building the secure structure out of modular, pre-cast concrete sections. But a coalition of concrete masonry experts worked together to demonstrate to the project’s architects how concrete block could improve several aspects of the updated complex.

“Quite honestly, masonry was just a really good fit for them,” says Mark Wilhelms of Midwest Block and Brick. “Their initial thought was that they would use pre-cast, but as they were trying to develop their design, masonry proved to be a better solution for them. Everything came together with the contractors, the suppliers and the technical design team. We just clicked and everything worked out really well early on in that project.”

Wilhelms says a big part of the coalition’s 2015 presentation focused on concrete masonry’s long-life cycle. “We made an effort to say that when you build this, it’s got to last,” notes Wilhelms. “We won’t be replacing this hospital in 25 years. We talked a lot about 75-year, 100-year design life for these buildings.”

Another aspect of the presentation was devoted to masonry’s improved performance in severe weather events. “Missouri is prone to tornadoes and high winds. In this type of hospital there’s no way they were going to move patients in the event of a tornado. They weren’t going to move patients down to a tornado shelter. We talked about masonry’s durability in storm situations and pointed out the fact that it can be designed to withstand heavy winds.”

One key member of the coalition was a structural engineer who provided models of various wall designs that analyzed potential stresses of masonry walls during the design phase. “We ran different wall configurations through finite analysis and graphically showed how stresses were transferred around windows and doors to the surrounding masonry and how masonry walls and foundations could pick up those stresses and transfer them out through the wall. That went a long way to document that masonry does work; the wall works as a system and not as individual pieces,” says Wilhelms.

In the end, lightweight concrete masonry units became the building material of choice for the $211 million project. Around 1.1 million units are being placed in the walls that make up the new state-of-the-art treatment center. “Lightweight is just that much easier for masons to work with,” says Wilhelms. “The units are lighter and when they do need to modify them, the units are easier to cut. They just are a more user-friendly product all around.”That flexibility came into play while builders worked to achieve the architect’s vision for campus buildings with a distinctively sleek roofline. “There are many different angles and trying to accomplish this with other materials such as pre-cast would be very difficult to hit all those angles,” says Wilhelms.

“Masonry is flexible and site built. If we need to be two inches higher, two inches lower, it’s very easy to accomplish with masonry.”

Danielle Bach, architectural sales representative for Midwest, notes that lightweight block also helped keep the project’s construction schedule on track. “Because this project was on such a tight timeline, speed was a big factor,” says Bach. “The fact that the masons could lay a lightweight block faster than a normal weight block really helped in the decision to switch from precast to masonry.”

First of Its Kind

The new Fulton State Hospital organizes 12 distinctive living areas into four unique program communities. Most of the interior walls will feature durable, painted lightweight concrete block that can stand up to vandalism and provide lower long-term maintenance costs. “Lightweight block does have a consistency to its texture that when painted, brings a little nicer appearance to the interior,” says Wilhelms.

The exterior skin of the building features accent areas made up of ground face concrete masonry units in a striking black finish. “Designers typically have a very distinct aesthetic that they want to achieve or have in mind,” says Bach. “On this project, the de-signer wanted a charcoal color with a cool undertones. Eventually, we were able to come up with a custom color that was exactly what they were looking for. It gives the building a modern edge with the charcoal color.”

Installers placed the exterior ground face units in a stacked bond pattern. “The units are stacked one on top of the other versus a running bond,” says Bach, “so that provides a clean line, leading to a cool grey modern looking building versus something that’s more institutional.”

Beyond the aesthetics, concrete masonry also helps the new campus meet today’s energy guidelines. “Energy compliance today has become a huge part of a building’s planning,” says Bach. “The building codes are ever changing and becoming more stringent. So, working with the designers from the very beginning on the cavity wall construction, the lightweight back-up along with the ground face veneer was extremely important. Lightweight also has a greater thermal value than normal weight so that was helpful in playing into the whole cavity wall system."

Midwest Block & Brick is one of the largest and most efficient masonry and landscape companies in the United States.